Have you been looking for a way to get involved in your community at Berkeley City College? Do you have amazing ideas for different events that you want to see come to life? Joining ASBCC (student government) is the opportunity for that! By joining ASBCC, you are able to plan events that will have a direct impact on the student population, build your leadership and public speaking skills, and give back and support the students at Berkeley City College!

You can find the application by clicking here. The application deadline is Tuesday, February 23rd, 2021 at 5PM and is due to the Director of Student Activities & Campus Life at johnnguyen@peralta.edu

Do you need help accessing Canvas for the Spring 2021 semester? We’re here to help you! 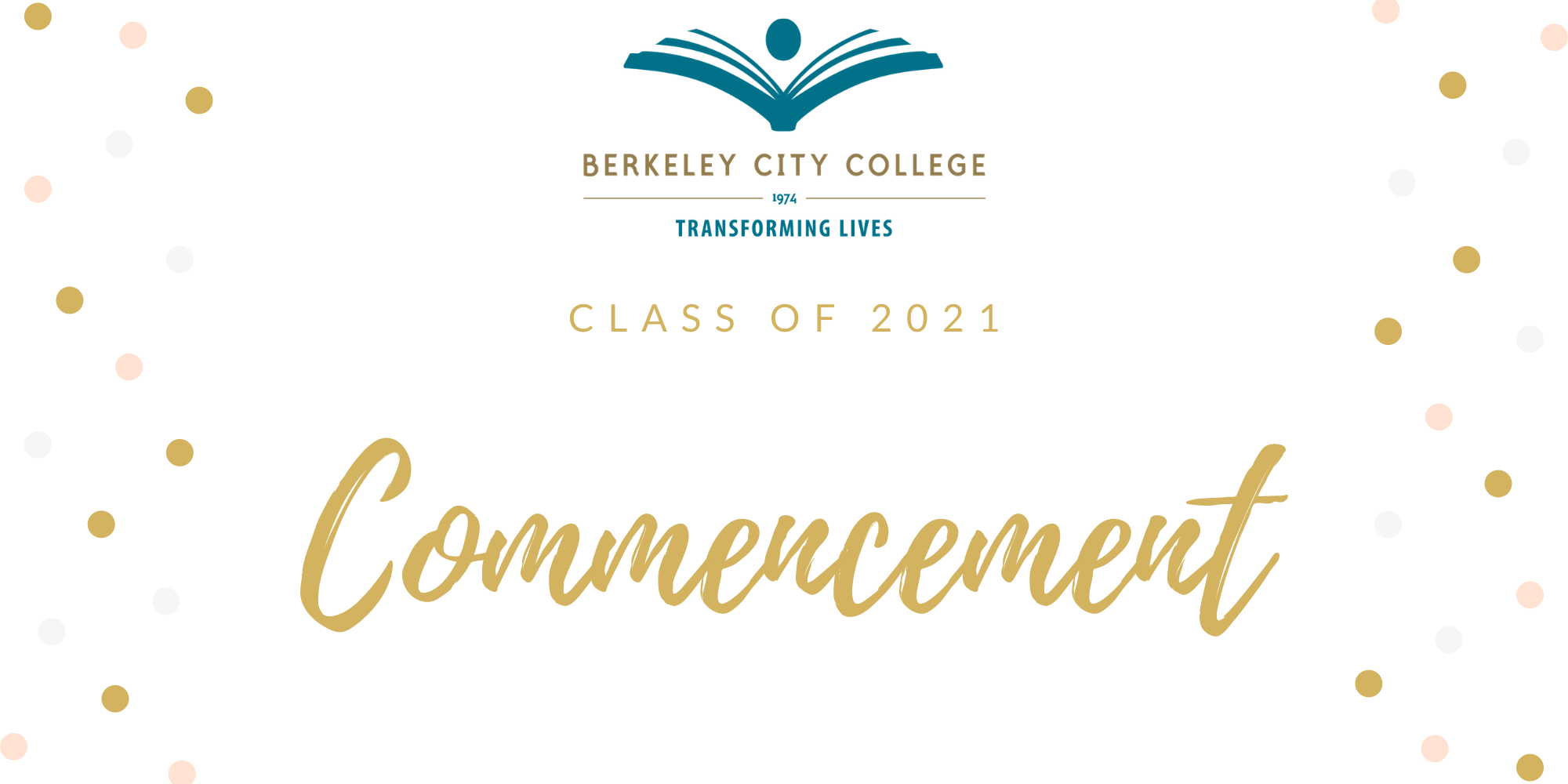 Are you planning to graduate during the Spring 2021 semester? Schedule a virtual appointment with a counselor to petition for graduation by March 12th, 2021!

How can I participate the virtual commencement?

Please schedule an appointment with our counselors to petition for graduation. You can schedule a Zoom appointment online on this page: https://www.berkeleycitycollege.edu/counseling/appointments/

Petition for AA, AS, AA-T, and AS-T Degrees

Petition for Certificate of Achievement/Completion

When is the deadline to submit my petition to a counselor?

The last day to meet with a counselor to submit your petition is on Friday, March 12th.

How exactly will a virtual commencement work?

A link will be e-mailed to you where you will be able to upload a photo of yourself and a message. More information will be provided.

Will I be able to purchase a cap and gown?

Yes, you may be able to purchase a cap and gown through our bookstore at https://www.berkeleycitycollege.edu/bookstore/
For shipping and store pickup, order by: Monday, May 12th, 2021 to receive your caps and gowns by commencement.

When will I be able to receive my degree?

You will be able to pick up your degree during the Fall 2021 semester depending on the shelter-in-place order.

If you have any additional questions, please contact John Nguyen at johnnguyen@peralta.edu

Berkeley City College (BCC) today announced that it has been awarded a highly-competitive nearly $3 million Developing Hispanic Serving Institution grant from the Department of Education to expand supportive services for Latinx and marginalized students. This is the College’s first grant since being named a Developing Hispanic Serving Institution (HSI) by the US Department of Education in 2020. As a population that has been disproportionately impacted by COVID-19, these additional academic and student support services come at a critical time.

“Berkley City College serves as a critical resource for the growing Bay Area Latinx communities – and this grant demonstrates the dedication of our faculty, staff, and administrators to implementing educational strategies to support our diverse student population,” said Dr. Angélica Garcia, President of Berkeley City College. “As a Chicana and first-generation college student, I am humbled to serve as President for a college that ensures students from all backgrounds have access to higher education with the resources they need in order to succeed.”

The nearly $3 million grant will be awarded in approximately $600,000 increments over the next five years. The funding will allow the College to increase Latinx and marginalized student retention and graduation rates by providing enhanced support and advising; assistance transitioning from high school to community college and post-secondary education into careers; a FAFSA completion and financial literacy campaign geared towards Latinx students; increased outreach and recruitment of Latinx students; and expanded professional learning opportunities for student success staff, faculty, administrators and the community.

“We spent weeks working on our ‘Conocimiento Los Caminos’ grant application before submitting it to the Department of Education in May of this year,” said Dr. Stacey Shears, BCC Vice President of Student Services. “We are grateful to the faculty, classified professionals, and administrators who helped secure this important funding and we look forward to offering these expanded services for Berkeley City College students.”

This most recent grant award is part of a Peralta Community College District-wide initiative to expand services for marginalized and minoritized communities by interrogating and transforming our systems with an equity advancing lens.

While we remain open and offer classes remotely, COVID-19 cases are on the rise in our country, our state, and our local community. On December 6, 2020, Alameda County joined several counties in the Bay Area to implement the state’s new regional Stay Home order. The new order, Number 20-21, began on December 7, 2020 and remains in effect through January 4, 2021. This Order reflects new restrictions imposed by the State of California in its Blueprint for a Safer Economy for Counties in the Purple Tier of the State’s reopening framework and adds additional restrictions.

So what does this mean for the Peralta Community College District? In short, work and study from home. The health and safety of our students and employees remains our top priority and following this order to stay home will help slow the spread of COVID-19. Please continue to work and study remotely and do not come to a college campus or the District office during the mandated Stay Home order unless it is absolutely necessary. Employees who need to access the college campuses to perform essential functions, should use your college access protocol to obtain approval.

All athletics team outdoor activities have been paused for the remainder of the Stay Home order.

As we head into the Spring 2021 semester that begins on January 25, 2021, we remain open yet all classes will be offered online, including non-essential Career Education (CE) courses and science labs. Essential CE courses may be limited to capstone courses only and /or may have a start date that is later than January 25, 2021. Athletics, including conditioning classes, will remain paused during the Spring 2021 semester.

We realize this is a difficult time for most of us to remain sheltered in place or to regress to earlier closure guidelines. We are doing all we can to keep our community safe and support student educational needs, now and into the future. We are open in the spring. Our dedicated faculty and staff are available online to support students. We have resources available including free Chromebook laptops and discounts for Internet service. We offer financial aid including grants like the California Promise Grant, which allows students who are first-time full-time community college attendees to do so for free. Additional grants and scholarships are available from the Peralta Colleges Foundation.

Visit https://safe.peralta.edu/ for the latest information about the COVID-19 pandemic and Peralta Community College District.

Thank you, stay and be well,

Yesterday, our nation witnessed a disgraceful display of vandalism, violence, and insurrection at the United States Capitol, during the long held tradition of validating the will of the people. Many political and educational leaders across the country have rightfully condemned the misguided actions of those rioters who breached the Capitol, and the Peralta Community College District denounces their lawless actions as well.

Let us bear in mind, however, that despite the events of January 6, 2021, we are witnessing historic change and progress. In winning his Georgia Senate race, Jon Ossoff became the first Jewish senator elected from the Deep South in well over a century. With his victory in the other Georgia Senate race, Raphael Warnock will be the first African-American Democrat from the Southern United States to serve in that body. Finally, with Congress certifying the election of President-elect Biden and Vice President-elect Harris, the United States we will have our first Catholic president since John F. Kennedy, and the first African American Vice President ever.

As a community we must remember that some contests are bitterly fought and victories are sometimes hard won. When it comes to the struggle for social reform and justice, there are people who believe that they have a right to challenge those efforts, even when it causes suffering to millions. The violence that was perpetrated on Capitol Hill yesterday was an attack on the democratic values of our country. Let us always remember that as leaders in the California Community College System, we have no other option but to stand upright and advocate for what is right. We commit our leadership to advance student success and dismantle the fabrics of our institution that serve as barriers to equity and inclusive excellence.

So today, let’s celebrate our new administration, and hold in our minds and hearts a sense of hope, compassion, and commitment to our communities despite the efforts of those who seek to undermine our democratic institutions and our common humanity.

Thank you and be safe,