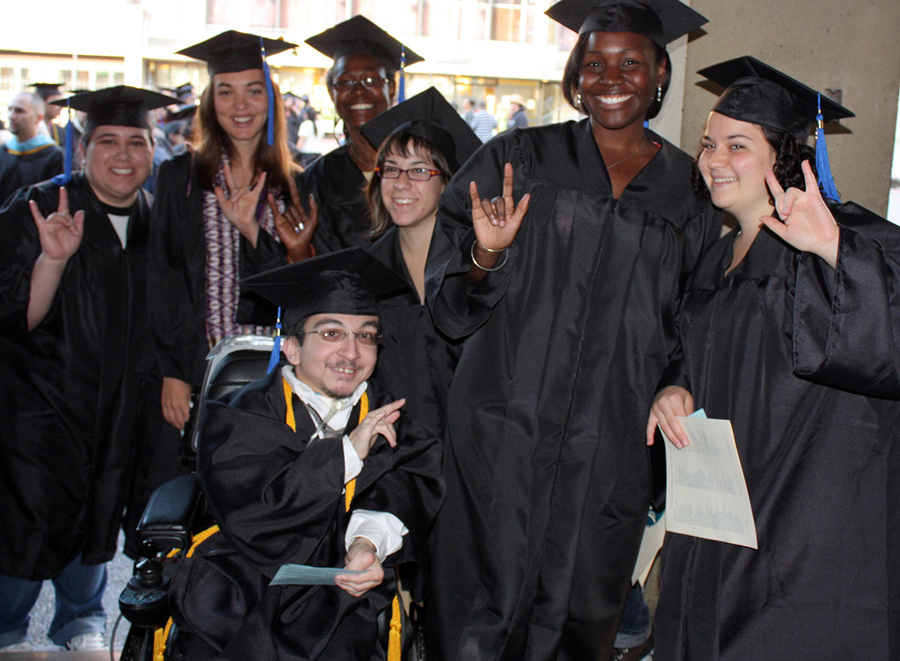 Where Are They Now?

He was born in Berkeley, but currently lives in Oakland.  At the age of 18 months, doctors thought he would not be able to talk, so he learned sign language, but it was not ASL; it was Sign Exact English (SEE).  He stopped at three-years-old because he started to talk.  After graduating from high school sixteen years later, he entered BCC because he heard they had a great ASL program and he had to take G.E. classes anyway.  He started learning the language and loved it. He enjoyed the communication between his peers and instructors.  He even became a tutor in spring 2008.  He graduated with an Associate’s Degree in American Sign Language a year later.

He says, “The ASL program has tremendously helped me communicate with my peers since it is required not to use my voice while signing; when I speak, it is sometimes hard to understand me.  I have met some wonderful individuals who I can call my friends.  The instructors are amazing because they encourage, care, and help their students with a problem.  Moreover, some of them are in the textbooks and DVDs.  It is one of the best programs I have been in and I truly appreciate having the opportunity to meet these amazing people and learning such a marvelous language and culture.”  He will continue to socialize with the Deaf community, but he does not see himself becoming a certified interpreter.

She is an Asian adoptee who grew up in Tennessee, but currently in San Francisco where she works as a barista at Starbucks.  She took Ramona Galindez’s summer novice course because she wanted an introduction to American Sign Language without enrolling in a full program, but once she started, she loved it.  Therefore, she decided to go ahead and enroll in ASL 1 at BCC and go from there.  Once she continued, she fell more in love with the language.  She graduated from BCC in 2008 and is now a student at Ohlone College in the Interpreter Preparation Program; this will be her second year.

When asked to say a few words about her experience taking classes in ASL at BCC, she said:
“BCC has highly skilled and well-known instructors who are also supportive mentors and contacts in the Deaf community.   There are very few schools in the Bay Area that offer full ASL programs.   Other students who take their first few classes at non-program schools before transferring to BCC will find themselves needing to retake classes they may have already completed because they are not up to par with the advanced classes at BCC.   The program offers a wide range of classes and assignments that provide a range look at Deaf Culture, Language, and Community–past and present.   The work experience class changed my life because it connected me to DeafHope with whom I am still volunteering and actively involved.”

She grew up with a severe speech problem, so my dream from childhood was to be able to communicate in American Sign Language. Finally, in her 50s, she had the opportunity to study ASL. She began taking night classes at Vista (before the name changed to Berkeley City College) in January 2006. Not only was Vista convenient for her (since she lives in Oakland); it had a great reputation for its ASL program. She remember being very impressed at the first class, so she knew she was in good hands.

She met wonderful people in and out of the classroom, and — as part of the program — she volunteered a few Deaf organizations, such as DCARA, where she met many people in the Deaf community — all extraordinarily generous with their time and support of her endeavor to learn ASL. She was honored by DCARA in March 2009 as the recipient of their Deaf Community Volunteer of the Year Award for the work I did with them in 2008. Gaining the recognition of the Deaf community in this way really validated what I have felt ever since she started studying ASL and meeting people who are Deaf — it is a feeling of being welcomed; it is a feeling that she is home.  She is currently an Intervention Specialist working with young children and trying to teach them ASL in the Oakland Schools Special Education Deaf Program. 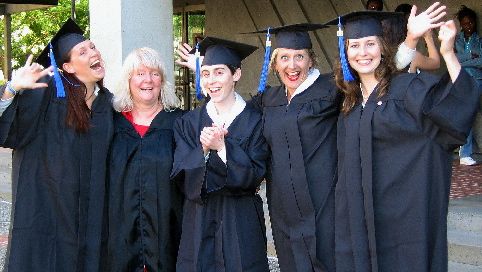 Connie always had an interest in sign language and the deaf culture, so she finally took some classes while working in San Francisco.  She also volunteered at the UC Center on Deafness and ASL TV.  She took the level 1 to 4 ASL classes from 2001 to 2004 while living in Emeryville and Richmond.  She enrolled into the ASL program at Berkeley City College because it was convenient as far as location and class schedules.  In addition, the program and the instructors have a great reputation for being the best.

Connie currently works at KCBS radio and has not been using ASL professionally.  Nevertheless, she hopes to find more ways to continue practicing the language.  On random occasions, she has run into deaf people on the streets or in her travels, such as France, Italy, Cambodia and Korea. Even though American Sign Language is different from their dialects, she was able to communicate with them because of her knowledge of ASL.

“It’s beautiful how this language crosses all barriers and makes the world such a small place!”

As a broadcast journalist, she is also interested in filmmaking and hopes to work on a documentary featuring the deaf community one day.  When being asked to summarize her experience in the ASL program at Berkeley City College, she responds, “The ASL program at BCC is a great way to jump right into learning sign language.  The first level classes begin immediately with the instructors teaching only in ASL!  Sounds intimidating at first but it’s a great way to learn. And there’s so much going on that you soon forget that your two-hour class was completely silent.”

Since leaving Vista, she worked for a year at the California School for the Deaf in Fremont as a cottage counselor.  The following year she returned to school and entered the Western University of Health Science’s College of Osteopathic Medicine in Pomona, California.  She is now in the Navy stationed in Washington State as an Undersea/Dive Medical Officer, but will be going to Afghanistan in July as a general medical provider.

He is an officer who works for the police in Solano County.  He uses his ASL skills to assist deaf community members and other officers by facilitating communication.  He will be presented an award from the Commissioners office for the work he has done with the deaf community during an employee appreciation day.  When reflecting on his experience at BCC he says, “The education and experience has enriched my life and I have met many wonderful and talented deaf people.  There is also a sense of satisfaction and relief that I see in the faces of those with whom I interact while on duty.  They are happy to see that someone in the police force has taken the time to learn of their culture and language.  I have resolved tensions and defused misunderstandings between police officers and some deaf people on a few occasions.”

She began learning ASL at Vista in 1989, while still in high school.  After completing the ASL certificate program, she attended Ohlone College’s interpreter preparation program.  She has been working as an interpreter since 1995 and RID certified since 1999.  Woods completed her bachelor’s degree at Mills College and her master’s degree at San Francisco State University.  She is very grateful for the strong ASL education she got at Vista, and is especially thankful to her teachers Ella Mae Lentz, Ken Mikos, Dennis Waterhouse, Mary Telford, and Lon Kuntze.