POSTERS OF RESISTANCE: VISIONS OF PEACE AND JUSTICE

DONATE TO THE INKWORKS MURAL PROJECT AT 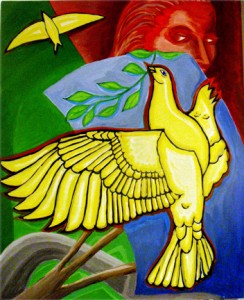 The effort that produced the design for the InkWorks mural has been one of true collaboration.

Classmates and teacher, community supporters and members of the InkWorks collective have all served as masterminds, artists and providers of crucial feedback throughout the process.
In conceiving of the theme and images, we were determined to remain as true to the vision of InkWorks as possible. Our process began with the seven central themes presented by the collective’s work:

Internationalism & Peace, Labor Movement, Racial Justice, Women’s Liberation, Queer Liberation, Environment & Public Health, Elections & Reforms, Arts & Culture. In groups we developed and revised sketches depicting various struggles within these topics, and with consistent feedback from InkWorks members, refined the images into a design that encompasses these topics. The final theme for the mural, therefore, is one of struggle and resistance to injustice, past and present. In particular, the centrality of printed image and word in various contexts of movement and struggle.
The mural design flows from a central image of a large printing press. 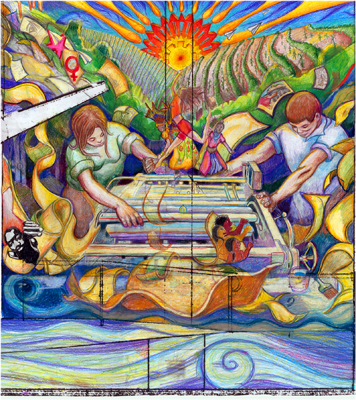 A sun made of gears rises above the press-workers, lighting fields of integrated crops. From the press come posters, carrying images of social justice across the walls in both directions and leading the eye into the other sections of the mural. 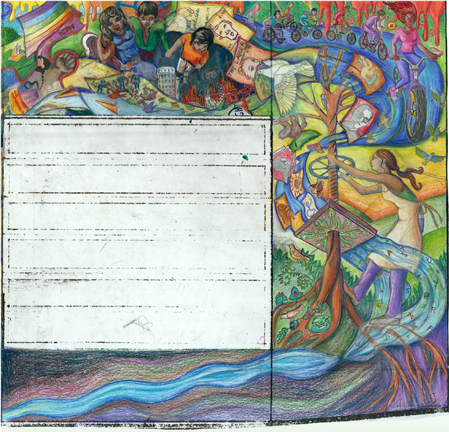 To the right is a utopia of sorts, focusing on a historic Gutenberg Press whose stand stretches downward and becomes the roots of a tree, upward into branches. This press and the woman turning it are surrounded by wildlife, and Critical Mass bikers emerge from the top corner. Beside these images is represented Queer resistance through images of AIDS protests, the Harvey Milk Riots, examples of historic queer publications, and the three figures of a black drag queen, androgynous young person and George Steven Lopez Mercado, a young man recently brutally murdered in Puerto Rico for his sexuality. 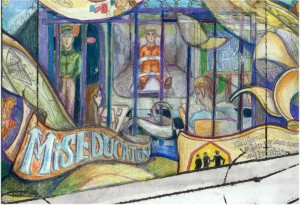 To the left we find the presence of dystopia, represented by housing foreclosures, the funneling of money into war and prisons, pollution and its devastating health affects, and a battle between a community and riot police. Sweeping behind the battle is an image of the earth, with figures representing communities and struggles emerging from the continents and framing the mural in its’ global context. A march of protesters, representing a great number of struggles, and including InkWorks poster images rounds the bend and closes in on the viewer. The most recent and current issues; the local murder of Oscar Grant, union struggles, immigration rights, are in the forefront of the image, with a chronology of those past and ongoing receding into the background. Throughout the mural image is the consistent presence of complexity, conflict and resistance, represented on the many posters that fly outward from the center.

In producing the image, the True Colors Mural Collective has been educated in the rewarding challenges of collaboration, and through this experience, we have learned to communicate with each other for the benefit of our vision. As a group, we are excited to continue the process of coloring the walls of InkWorks Press with these stories of resistance. 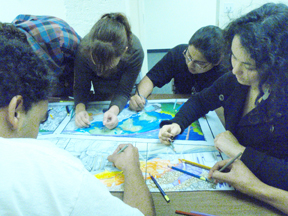 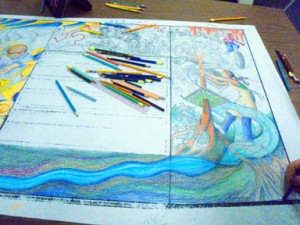 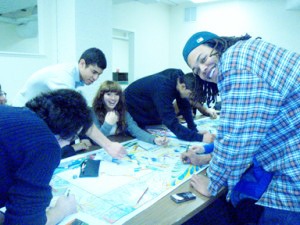