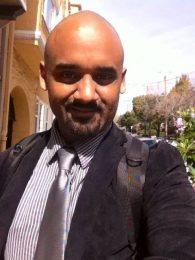 Dr. Mobley is a composer, theorist, pianist, and musicologist.

He is lead faculty in music in the Department of Arts and Cultural Studies with Berkeley City College.

Mobley’s teaching focuses on the history of the blues, jazz, Western art music, American music, and the development of popular music and culture.  His current research examines the intersections of aesthetics and economics in the high arts and popular music.

Dr. Mobley is also a professor of music with the California Jazz Conservatory where he teaches counterpoint and composition.

Before teaching in Berkeley at City College, Mobley was faculty in music with the University of Arizona in the Fred Fox School of Music where he earned a doctorate in composition and theory. His master’s studies were in music & computer science at Carnegie Mellon University with undergraduate degrees in piano, composition and theory in the Meadows School of the Arts at  Southern Methodist University in Dallas, Texas.

As a composer and pianist he has had original works premiered and commissioned by members of the Dallas Symphony, Pittsburgh Symphony, New York Philharmonic Orchestra, Voices of Change, El Cuarteto Latinoamericano, and various ensembles and performers throughout America, Asia and Europe.

Mobley has been the recipient of various distinguishing awards including an Andrew W. Mellon Foundation Fellowship in the Arts, a National Endowment for the Humanities grant, and a software research associate’s award in the Machine Learning Department, an academic department within Carnegie Mellon University’s School of Computer Science.

His electro-acoustic compositions appear on the Architects & Heroes | Digital Art Collective label and have been featured in concert, film, dance performances and art installations.

Aaron Mobley is also an author and affiliated faculty with The American Culture and Ideas Initiative — an institution (at the Fred Fox School of Music in the University of Arizona) that celebrates the American intellectual experience, especially the rich legacy of high art, music, and dance, and the philosophical principles of the founding of America, political and economic, that promotes this flourishing culture. http://acii.arizona.edu

LISTEN to some of my recent works:

All music courses are offered in a variety of formats and times to suit students’ schedules: mornings, afternoons, evenings, weekends, and/or 100% online.